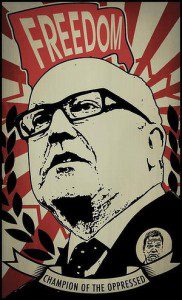 I’m a bit late updating the site with this article from last week in which I argued, against Antony Loewenstein, that Section 18C of the Australian Race Discrimination Act should not be repealed as proposed by the Attorney General, George Brandis. I preempted Antony’s argument, that the 18C which protects against racial vilification could be used against those who campaign in favour of Boycott Divestment and Sanctions against Israel, as Zionist organisation Shurat Hadin is trying to do against Sydney University Professor Jake Lynch.My argument is that, it is undoubted, as I have argued in many places, that the state is duplicitous in its implementation of antiracist legislation while enacting racist policy and practice at the same time. However, protection from racial discrimination and vilification is generally called for by those who face racism, and it is not up to those not directly affected to argue against it. Antony’s argument and those of his supporters is that vilification laws are an ultimate danger for freedom of speech. But, the fact is that, in practice, any threat to the freedom of speech of the middle class, non-racialised population is outweighed by the daily racism (systemic and casual) experienced by people of colour, migrants and asylum seekers. Right-wing media pundits like Andrew Bolt, against whom Section 18C was successfully used, do not suffer in any real way from the existence of these laws. He did not lose his position or his ability to sully debate in this country in any sense. However, giving him license to spout racism in the interests of ‘freedom of speech’ would be a significant symbolic loss for those of us committed to racial justice. Freedom of speech is a strawman of liberals across the West; we all know that the freedom they expect for themselves is deemed higher than that of their opponents. You can be ‘free like me’, but not free ‘against me’. That is why those who cried freedom of speech following the publication of the ‘Muhammad cartoons’, opposed the freedom of speech of outraged Muslims to protest their publication. I am not under any illusion that Section 18C will end racism, but in the limited armory available to us, it is an important – symbolic – tool.